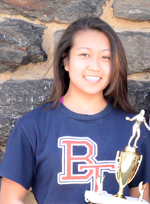 Manhattan native Samantha Feng is something else when it comes to handball. As a bystander when first introduced to the sport by her sister and her friends at Simon Baruch Middle School, she first doubted the difficulty of the sport. Little did she know how complex handball could be. It was the joy of defeating all of those around her that she found so enticing. In no time, she was quickly lured deeper into the game.

One year and a couple of inches later, Samantha joined the Brooklyn Technical handball team. She partnered up with then-junior, Shirley Tsang, as second doubles, with hopes of helping Tech obtain the Championship title for the second year in a row. However, much to Samantha’s dismay, it was Fort Hamilton that claimed the elusive 2009 PSAL handball Championships title.

It was an unacceptable defeat for Samantha and another reason to train harder. She resumed her intense training along side her apt mentors, Paul Angel, a remarkable coach to many, and Danielle Daskalakis, another refined athletic and role model of her generation.

“I have the two most amazing mentors in the world. They’ve helped me so much!” she proclaimed. “They were always there for my games and tournaments. I remember when Paul told me to hit the ball to the wall ten times with my left non-stop, and I told him I couldn’t do it. His response was ‘Don’t ever say you can’t’”

Cordially yielding to such advice, she rose to third singles during her sophomore year; first singles her junior year. Her determination and persistence, great forces of her character, are key factors of her success. However, it is also her prominent confidence—a rare quality found in most—in herself and in her abilities to overcome any difficulty that pave her way to gold trophies. More importantly, her strong hatred for losing is extremely profound. It is subtle to bystanders, but those who have played with or against her know that her reluctance of losing is undeniable.

Her determination is not the only force keeping her in the game. Her keen ability to play the sport like she does is surely a critical factor. The trophies that mock her while she sleeps is another. Drawing inspiration from her well-earned trophies and medals, she won’t be able to stop the augment of her marvelous collection. The world, perchance, may soon have to accept Samantha’s passionate desire to become one of the top women players in the world; for she is determined to keep herself in the game as long as possible.

Her modesty precludes her from boasting about her stunning collection of plaques, trophies, and medals. Nonetheless, her hard work shall not go to waste.

If one were to ever seek advice from Samantha Feng, she has three words for him or her: Practice makes perfect.